Way back on 60's, it was a time when people did not give credence to contraception or population. That's when TTK Protective Devices Limited (formerly TTK - LIG) made its entry and redefined the Indian viewpoint. TTK PDL, the pioneers of the condom manufacturing and marketing in the country is in condom business since 1950s and has pioneered various breakthroughs in the industry. From establishing India's first condom manufacturing plant in 1963 to installing the country's first electronic testing facility; and from introducing India's first non-subsidised condom in 1974 to pioneering condom variants and pleasure enhancing accessories.

Skore Condom is TTK's trophy product and a condom brand that is very quickly becoming popular with couples across India. Skore is a refreshing, stylish and cool brand that fits in with the changing socio-cultural trend in the country and with the increasing awareness on safe relationship among the youth. It boasts of a very exciting and trendy range consisting of coloured, flavoured, dotted and climax delay condoms. To the youth, Skore, with an exciting range of products, makes the practice of safe sex not just easily workout , but easily enjoyable too.

TTK Protective Devices Limited now has a capacity of around two billion condoms per year. With exports of over one billion condoms year after year to various countries including the UK, USA, France, Germany, Australia, Spain, Mexico, South Africa and Brazil, TTK Protective Devices Limited is one of the largest manufacturers of condoms in the World. And it won some awards in the process too - JIPM's Award for TPM Excellence, CII's Award for the Excellent Water efficient Unit, National Award for Leadership Excellence in Safety Health and Environment, Best Exporters Award from CAPEXIL to name a few.

TTK's condom brand Skore has launched an ad film for its new range Skore Not Out. The TVC conceived by McCann Erickson hit the screens on 10 October 2013.The film shows a young man being pampered by several women. While two girls on a scooter offer him a ride seated between them, another woman rushes to open the door for him. Yet another pays the restaurant bill, while female colleagues rush to offer him a tissue as he sneezes. As he leaves work, a woman stops her car and picks him up. The ad ends with a super asking, "Wonder why they are good to him?" This is answered by a female voice over that says, Not Out - Climax delay condoms from Skore". A pack shot and the super Lasts longer than you think, completes the film.

In the previous campaigns, Skore had communicated it's dotted, coloured and flavoured range respectively to it;s TG. There new campaign is all about Skore Not Out, climax delay condoms .The trick of the commercial was to build curiosity and generate excitement in letting them know that love too has its own after-effects. The more time and love you give to your partner, the more love you will get in return. Not Out condom enables you to do that. It carries not only pleasure for him, but pleasure for her promise and this has been flawlessly divulged in the commercial. 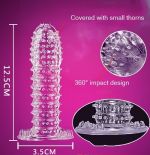