Okamoto's SKIN LESS SKIN condoms are touted as World's thinnest condoms. These exceptional condoms are made using revolutionary Japanese Technology which ensures highest standards of strength and durability while ensuring absolute pleasure as couples can experience the natural silkier feel of manhood during the love making.

Okamoto has been in the business for the past 75 years and the condoms are made to fulfil the basic feelings such as thinness and softness. And the brand has been pushing the envelope in producing condoms with outstanding quality, without compromising 'safety' which is the most important reasons condoms are used for. Thus, Okamoto condoms tread along the considerations of 'thinness', 'softness' and 'safety'

Thinnest in the world - Okamoto manufactured the world's thinnest latex condoms while conforming to the requirements of ISO 4074:2002. The company has rightly named the thinnest condoms as Skinless Skin condoms, which can give absolutely natural feeling while being used.

Even Thickness - One of the appreciable features of Okamoto condoms is its 'even thickness'. We have seen other condom brands advertising theirs as the thinnest condoms measuring "0.03mm', what it actually mean is only a thin portion near the tip of the condom, whereas Okamoto condoms are evenly thin from the open end down through the middle to the tip of the condom. No other condom brand has claimed even thickness as of today in the market.

Softness - Okamoto condoms come with its signature softness, because it is important to get the comfort and closely-fitting comfort to the couple. Okamoto has proven to be softer than other brands by internal modulus and one can also find that characteristic by swelling up the condom. It can swell more easily and freely than other brands. Softness is important to retain the intimacy for the couple after wearing the condom. The passion and the intensity could be affected when the condom is not soft enough and that could play the spoilsport.

Safety - Okamoto condoms are manufactured with stringent quality standards conforming to ISO 4074:2002 to ensure every condom that reaches customers is absolutely safe.

Okamoto has wide range of condoms to suit the varying size, texture, colour, flavour, shape and other preferences of young customers who want to indulge in satisfying and yet safe sex. Okamoto's ultrathin condoms can get you to the closest feeling of having natural skinny dipping. Okamoto's ultra thin is coming with Omega flavour to add spice to your love making.

Further, Okamoto has dotted condoms which have 1350 dots on a single condom. The dots can provide heightened stimulation when it rubs against the soft tissues of her vagina, making the experience all the more blissful for both the partners. The dotted variant comes with strawberry aroma. You get contoured and dotted condoms in mint and vanilla flavours. While dots itself can help you experience highly sensual sex, contours can make penetration all the more exciting. There is an exclusive Okamoto condom in blueberry aroma. Not many brands can boast of having a condom in blueberry aroma, which is sure to excite her. 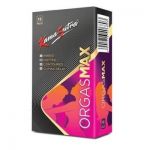