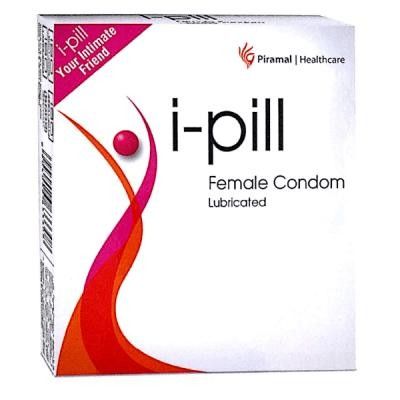 Be the first to review this product
₹110.00
Availability: Out of stock
SKU
9017
Add to Wish List
Email
Details

I-Pill Female Condoms are ideal for those confident women who don't want to compromise on the protection from unwanted pregnancy and STDs and yet want to enjoy a sensual sexual encounter.

I-Pill female condoms are made using high quality latex and are lubricated on both sides to ensure both partners enjoy a smooth ride and there is no discomfort or pain for women during sexual intercourse. I-Pill female condom is designed to ensure it remains firmly inside your vagina during the intercourse, despite the speed and intensity of the thrust. The female condom will remain in its position even during penile misdirection or penis slip and can hold the entire semen load after ejaculation without any problem. It is easy to insert and remove after sexual intercourse.

Preferably I-Pill female condoms should be inserted into the vaginal hole even during foreplay to enjoy uninterrupted skinny dipping.  Modern and progressive women prefer I-Pill female condoms as it gives them the much needed confidence to enjoy intercourse without any inhibition as they have can call the shots.

It requires a bit of training during the first time to insert the female condoms correctly. There are countless demonstration videos available for woman to try female condoms on her own. Though it might look little difficult in the beginning, it becomes normal after a few times.

Female condoms are known to give more pleasure to woman as the outer ring of the condom rubs against the clitoris during the to-and-fro motion of penis. Any woman who can use a tampon can use a female condom comfortably.

The highly elastic I-pill female condom ensures there is very practically no chance for a breakage. Clinically tested for side effects and allergic reactions, i-pill female condoms are ideal for every woman who wants to enjoy a healthy sex life without any worries.

-              Provides highly sensual sexual experience to a woman, as the external ring may rub against the clitoris during vaginal intercourse.

-              Ensures safe even after the end of intercourse not waiting to see whether the man maintains his erection or not… condoms can get risky when semen can spell over the vagina when the man suddenly loses his erection after ejaculation.

Female condom is like an elegant pouch with two flexible rings, one open ring and one closed ring. The closed ring should be inserted into the vagina and open end remains at the outside. Penis can be inserted from the open end and the closed end will hold the pre-cum and semen when the male ejaculates.

How does I-Pill Female Condom works?

When inserted properly, I-Pill female condom can hold the semen from entering vagina and thus protects the woman from unwanted pregnancy and infections.

Is I-Pill Female Condom suitable for me?

Female condoms can work wonders when you know how to use it properly. It is perfectly suitable for women of all types and ages. Any woman who knows how to use a tampon can use Female Condoms.

Is it safe to use I-Pill female condoms?

How to use I-Pill Female Condoms?

It requires a little practice during the first few times. Then it becomes very easy and comfortable to use. We give you a step-by-step method to how to use female condoms with images

Step 1 – Open the sachet at the top. Pull out the female condoms and see whether it is without any cut or damage

Step 3 – Close the inner ring and then insert it into the vagina slowly. This will hold the ejaculation inside during the intercourse while the outer ring will remain open at the opening of the vagina.

Step 4 – Slowly insert the condom on to your vagina. You can choose a position that is comfortable for you to insert – standing, squatting, raising one leg, sitting, or lying down.. just about any position that you find it comfortable to insert.

Step 6 – Allow your partner to insert his penis onto the mouth of the condom. Ensure the penis is going straight into the vagina. If you feel I-pill condom is slipping into or out of your vagina, ask him to stop. Then place it right and then remove it after the ejaculation.

Step 7 – To remove the i-Pill female condom safely after intercourse, you need to hold the outer ring, twist is at the top to arrest the seminal fluids in the middle and then pull it out carefully as shown in the figure.

Can I-Pill Female Condom be used for multiple times?

No. I-Pill Female condoms should be discarded after single use. Wrap the condom in a sachet or paper and throw it in dustbin. It should not be flushed into your toilet.

Where can I buy I-Pill female condoms? Do I require a prescription to buy it?

I-Pill Female Condoms can be bought just over the counter or can be ordered online at https://condombazaar.com

What to do when semen enters vagina despite using a I-Pill female condom?

What is the price of I-Pill Female Condom?