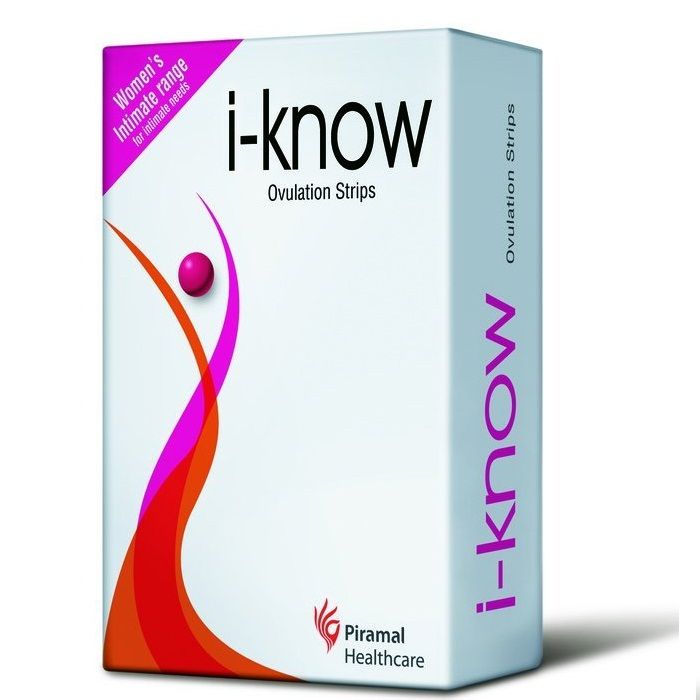 I Can Pregnancy Test Card

Ovulation Test Kit is a blessing in disguise for couples who are keen to conceive. The kit allows couples to know the most fertile period during the menstrual cycle and thus allow them to have sexual intercourse during those fertile days to increase their chances of conception.

I-Know Ovulation Test Kit is a category creator, being the 1st such product to be launched in the Indian market. A woman trying to get pregnant suffers anxiety and pain with each passing period when she is not able to conceive. I-Know ovulation test kit helps woman to determine her exact ovulation period in a month and through a simple test she can accurately predict the right time for conceiving.

I-Know is one of the most efficient and highly trusted ovulation test kits in India. I-Know Ovulation test kit helps woman to know their Ovulation period accurately through a simple testing procedure, which can be done at home. The kit detects the 2 most fertile days of the month for a woman during which the chances of ovulation are high for her. I-Know detects those 2 days with 100% accuracy. The pack contains 5 single use strips. I-Know was launched in 2011 as a part of intimate range of products for women in addition to I-Can and I-Pill. I-know helps woman to avoid anxiety and anguish.

I-Know test device will detect the LH surge which happens in the middle of the menstrual cycle, about 1 -2 days before ovulation. I-know helps in detecting those 2 days with 100% accuracy.

I-Know helps women to know the right time to prepare herself to move into motherhood.

Each pack of i-Know Ovulation kit has 5 test kits. You can order it online from www.condombazaar.com and get it delivered to your home conveniently.

How to know my ovulation cycle?

An overview of what happens in a woman's body during a typical 28-day menstrual cycle:

-              Day 14 -  Ovulation occurs mid-cycle but can vary anywhere between Day 11 and Day 21 of a woman's cycle. The increasing Oestrogen levels trigger the LH surge, which causes the follicle to ovulate and release an egg.

-              Days 15 to 22 - Luteal Phase - After releasing the egg, the follicle produces progesterone, which thickens the lining of the uterus for implantation.

-              Days 23 to 24 - Implantation of a fertilised egg can take place. In case of a pregnancy, hCG hormones produced due to pregnancy may be detected by a pregnancy test.

How to use I Know ovulation kit?

The pack contains 5 one time use strips. Follow the steps as given below

1. Ideally do the testing around noon (12 noon) or little later. Add 4 to 5 drops of your urine in the round portion of the I-Know Ovulation Test kit.

3. If you get T line darker than C line, then the result is positive. Meaning your most fertile period will be the next 12 to 24 hours.

4. If T line is lighter than C line or T line is not visible, then the result is negative. Meaning, you should repeat the text next day exactly at the same time.

When is the right time to start suing I Know Ovulation test?

The best time to take the I-know ovulation test should be around the noon. This is because LH will be synthesised in a women’s body in mornings thus making it convenient to show up in the afternoon in the urine. Avoid taking the test in the early morning or early in the day as it is not recommended.

How to use Ovulation Test kit with irregular periods?

When you are keen to have a baby, it is important that you need to chart and track your menstrual cycles so that you know your most fertile period to get pregnant. However, for women who have irregular periods, it can be a lot harder to chart their cycles and really difficult to determine their most fertile period.

But point to be taken is that even when a woman has irregular periods, she can still be ovulating regularly. We give below some tips to calculate ovulation for irregular menstrual periods. You should try doing the test regularly using I-Know ovulation kit until you get a positive.

Negative Result - The Luteinizing Hormone (LH) in your body released may not be detected. You should continue testing regularly at the same time on the subsequent days.

Ovulation is a natural process in which an egg is released in a woman's body during her menstrual cycle every month. The egg will survive in her body only for 24 hours. During this period her chances of conception is high if she has unprotected sexual intercourse.

What is I-Know Ovulation test kit?

It is an exclusive test kit that will allow a woman to know her ovulation period accurately. The product is a blessing in disguise for those women who are looking to conceive as they can identify their most fertile days in a month through I-Know ovulation test kit.

How to interpret results in I-Know ovulation test kit?

It is very easy to interpret 'I-Know results. When you get a test band with equal or darker intensity than the control band, then the result is positive. When the test band is lighter than the control brand or not visible, then it is a negative result.

How does i-know Ovulation test work?

When your body is ready to release an egg from the ovary, your body will begin to secrete a hormone called LH (leutenizing hormone). The secretion of LH hormone happens around mid cycle of your periods. I-Know pack contains 5 strips. Each strip has an LH antibody in the 'T' line. If LH is present in the urine, T line will display colour. Around mid-cycle the amount of LH hormone production starts to increase and then drops suddenly. The egg is released only when LH reaches its maximum level. And that is when your 2 most fertile days of your period happens. So, when you get T-line is as dark as the C-line that is an indication that LH is at its maximum and egg will be released soon.

How to use "I-know Ovulation Test Kit"?

The user should begin the testing as per the ovulation chart provided in the box. The test should be performed each day in the afternoon until she gets a positive result. A positive result is an indication that she will ovulate in the next 12-24 hours. The next two days after receiving positive results are the most fertile days and her chances of becoming pregnant will be highest in those two days.

When is the best time of the day to perform the "i-know" test?

You don't need to take the first urine as you need it for pregnancy test. Ideally you can test around noon (12 noon) or little later as the LH is usually synthesized in the morning and shows up in the afternoon urine. So, for best results, you should stick to a time around 12 noon or little later and you should collect the urine every day exactly at the same time. If required, repeat the test at the same time on subsequent days until you get a positive result.

Is I Know Ovulation Test safe?

Yes. I-know ovulation test kit is a one-step rapid test for the detection of ovulation and is absolutely safe and secure. In no way it will interfere with your menstrual cycle or other natural bodily functions.

When should a woman start using I Know ovulation test?

You should first know the length of your menstrual cycle. You then think back over the last few months to determine the usual length of the cycle you had. Circle the usual cycle length on the ‘WHEN TO START CHART’ given in the leaflet inside the box. Count ahead that number of days from the first day of the last period. This will be the day to begin your ovulation test.

Can I reuse a strip of "i-know Ovulation test" if I get a negative result?

No. you cannot reuse. "i-know" is a single use ovulation test kit.

Should I drink plenty of fluid before taking I Know Ovulation test?

No. On the contrary, you should reduce your fluid intake for about two hours before ovulation testing. More fluid can dilute the LH presence in your urine making it difficult for I-Know to detect LH presence.

I took the "i-know Ovulation test” and got a faint line… what does this mean?

A faint line on the "i-know" kit is not a positive. Only when the ‘T’ line is as dark as or is darker than the ‘C’ line, the test is considered to be positive.

What is the price of I-Know Ovulation test Kit?