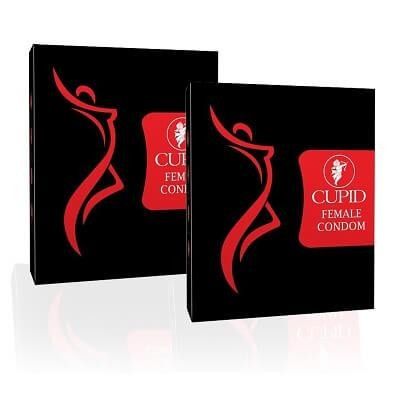 If you are not familiar about female condoms, then we welcome you to the world of Cupid Female condoms. These condoms are meant to provide you with utmost safety while enjoying every bit of your intimacy with your partner.  It needs to be inserted into your vulva before vaginal sex.

We advise you to check the expiry date of the condom before opening it. Then you can sit in a comfortable position and insert the condom onto your pleasure hole by squeezing the sides of the inner ring at the closed end of the condom.

You can then slide it into your vaginal the way you insert a tampon. Cupid female condoms are meant to give you maximum pleasure during your intercourse.

It is every easy to insert and use. It is recommended to insert cupid female condoms during foreplay to avoid unnecessary interruption. Try it tonight and see how comfortable it gets.

The product is designed to ensure it remains firmly inside your vagina during the intercourse, irrespective of the intensity of the to and fro movement. It can hold onto its position even during penile misdirection and can hold the entire load of the ejaculation. It is easy to insert and remove after sexual intercourse.

It comes with silicone pre-lubrication to ensure you both have a smooth and comfortable ride. Cupid Angel female condom comes in fascinating vanilla flavor to help you both enjoy a tasteful sex.

To make your love making session exciting and without any interruption, you can insert cupid angel female vanilla flavoured condom into your vaginal hole during foreplay and enjoy uninterrupted coital session without any worries.

Cupid Female condoms give you the confidence to enjoy sexual intercourse without any worries as you have firm control over the proceedings.

Female condoms are making its way into the sex life of young couples in India. Increasingly women like to use Cupid Female Condoms as it helps women take good control over the physical intimacy and they need not worry about unnecessary conception as they have total control.

Though it may be little awkward in the beginning, female condoms are equally comfortable when you get used to it.

The entire act of sex can be exciting for women with female condoms on as it can rub against her clitoris giving her intense pleasure.

To make your love making exciting and tasteful Cupid Female Condom comes in exciting vanilla flavor and lubricated variants. Female Condoms have lubrication on both sides. For first timers, they need to know how to insert female condoms and then they can go about repeating it.

Cupid Female Condoms are freely available at drug stores across the country. Women love to have it as it gives them better control over and they can be sure about protection. Few women go for it as her partner refuses to wear condom or not used to wear condoms.

Only thing it requires bit of training during the first time to insert the female condoms on to the vagina correctly. There are countless demonstration videos available for woman to try female condoms on her own. Though it might look little cocky in the beginning, it becomes normal after few times.

Cupid Female condoms are known to give more pleasure to woman as the outer ring of the condom rubs against the clitoris during the to-and-fro motion of penis.

Women empowerment is an overused term in our social circles. But if there is one thing that offers real empowerment to women in every sense, it is Cupid female condoms.

Cupid Female condoms are specially made for today’s educated, free-spirited and upwardly-mobile women who would like to take absolute control over their life. Clinically tested for side effects and allergic reactions, female condoms are ideal for every woman who wants to enjoy a healthy sex life without any worries.

Cupid Female condom is like a small pouch that can be inserted deep into vagina before intercourse to prevent unwanted conception. The condom has two flexible rings, one open ring and one closed ring. The open ring is comparatively bigger.

The closed ring should be inserted into the vagina and open end remains at the outside. It is made in such a way that a male penis can be inserted from the open end and the closed end will hold the pre-cum and semen when the male ejaculates at the end of the intercourse.

Cupid Female condoms are very effective in preventing unwanted pregnancy. When inserted properly (which needs little training), it can hold and thus prevent semen from entering vagina and thus protects the woman from unwanted pregnancy and sexually transmitted diseases.

How safe it Is to use Cupid female condoms?

You may need little practice during the first few times. If you are using it for the first time, it is better to get acquainted before using it in real time.

Then it becomes very easy and comfortable to use. So, for the beginners, we present a step-by-step method with images.

Step 1 – Open the pack carefully from the top. Pull out the female condoms and check whether it is in good condition. In the sense, make sure it has no tears or any other foreign material etc., Ensure no sharp object like scissors, finger nails, sharp objects, bangle come into contact with condoms while opening.

Step 2 – Use your index finger and thumb to hold the inner ring. Squeeze the sides of the inner ring so that forms Number 8 like structure. See figure.

Step 3 – Close the inner ring and then insert it into the vagina gently. The closed inner ring will hold the semen inside after ejaculation while the outer ring will remain open at the opening of the vagina.

Step 4 – Slowly insert the condom on to your vagina. You can choose a position that is comfortable for you to insert – standing, squatting, raising one leg, sitting, or lying down.. just about any position that you find it comfortable to insert.

Step 5 – Slowly push the inner ring into your vaginal opening. Push it as deep as it can go. Use your finger to push the condom further in. When it is fully inserted, the outer ring will cover the outer lips of the vagina. Now you are ready for an intercourse.

Step 6 – Allow your partner to insert his penis onto the mouth of the condom. Ensure the penis is going on the sides between the vaginal walls and the condoms. Ask him to stop if you feel the condom is slipping. Adjust and place it right so that you can continue the intercourse.

Step 7 – To remove the female condom safely after ejaculation, hold the outer ring and twist it at the top to arrest the seminal fluids in the middle and then pull it out carefully as shown in the figure.

Can it be used multiple uses?

Where to buy Cupid female condoms? Does it require a prescription?