What is meant by Male Contraception? 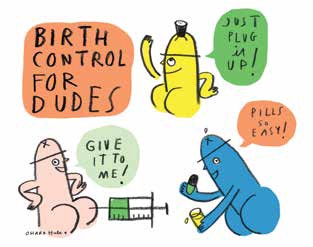 If the word male contraception looks completely new to you, then relax. There are few genuine contraceptive options available for male. Some women have knowingly become pregnant without taking any contraceptive out of fear that her boy friend, otherwise would leave her. They tell that they are taking pills, but will intentionally avoid taking birth control pills to become pregnant. So, we give below some of the contraception options that men can follow to avoid such occurrences.

In olden days, men were found to use neem, rue and hemp seeds to reduce their sperm count. But now, we have contraceptives that have proven to help men enjoy safe sex without any worry about pregnancy. Not only condoms, there are few other contraceptions available for men.

There are two types of pills available to help men enjoy safe sex.

Research is underway for another type of non-hormonal pill which blocks vitamin A receptors in the testicles which make men unable to produce sperm, but doesn't have any other adverse effect due to that.

The heat method is tried centuries before and it has been there around for several centuries. But it has proven to be a difficult method for most men to continue it for a longer duration. The balls are created in such a way that it needs to be cooler than our body temperature so that sperms remain alive. That is the reason why it hangs out of our body. If temperature in the balls increases beyond 95 degrees, sperms will get killed. So, the heat method involves heating up the balls a bit to kill the sperms.

The earlier method involves men to sit in a shallow bath of water with 116 degree Fahrenheit for 45 minutes. Anything below 120 degree is considered below the manageable threshold and will not cause any harm to the skin.

The recent version of heat method involves wearing a special pair of underwear that keeps the balls close to the body, so that they absorb the body heat.

But, it is found that regular exposure of heat method can cause infertility and / or reduce the sperm count produced otherwise normally. So, you are recommended to take your physician's advice in this regard and never try heat method without direct supervision of your physician.

Using the same techniques used to treat injuries, ultrasound treatments are used to kill sperms cells. This can help you become infertile for a few months at a time. This treatment needs to be repeated once every 3 months if you want to remain baby-proof.

Contraceptive ultrasound works this way. You need to place your testicles in a bowl of hot water, and then a blast of inaudible sound waves would be blasted at testicles. These blasts can kill sperm cells making you remain infertile for 3 months. Ultrasound method is completely painless and easy to try. It is also very cost-effective method.

Ultrasound has not become too popular male contraceptive methods because few countries use this method to sterilize stray dogs. Also, men are worried that it can make them completely infertile in the long run. Also, there are no studies have been made on the long term effects of ultrasound method as men are unwilling to continue it for a long term. With sustained research, this may well be a viable option for male contraception in future.

Of all the male contraception methods, vasectomies are the widely used methods across the world. It is also the one that is routinely done across the world and are quite popular. Plenty of men get vasectomies done when they decide that they no longer want children. Vasectomy involves cutting the vas defrens, tubes that are involved in transporting the sperm from the testicles to the ejaculatory ducts during an orgasm.

This involves a simple surgical procedure and doesn’t require an overnight stay in the hospital. Vasectomy is covered under insurance. Vasectomies are not always reversible. So, it is not advisable for young men who are keen to delay their baby-making for a few years.

This opens up one of the exciting possibilities in the world of male contraception. This is an innovative extension of vasectomy. Instead of cutting the vas deferns, a polymer is injected into the tubes that essentially blocks semen from passing through. The polymer blocks the semen from moving out. If a man changes his decision and wants to have a kid, then he can have another simple injection which can remove the polymer and his fertility is back. The reversal in this method is the quickest compared to any other form of male contraceptives.

Though this is under clinical trials currently, Vasalgel can be expected to be available for men in the next few years.